Skip to content
I’ve been seeing a lot of complaints about the Samsung Galaxy S6 battery life, and when I posted a screen shot of my 5h31m screen-on time to twitter, my friend Bluewall stated that”If you post this screenshot on XDA, the thread will go batshit crazy“. 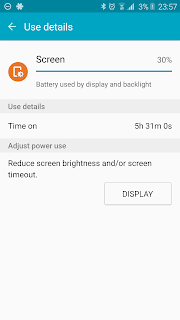 Battery life on Android phones is a funny thing, but I am consistently getting more than 5 hours screen-on time on the Galaxy S6 with at least 17 hours of overall battery life. I’m not doing anything rocket sciencey, but since advice is free and you can ignore me at will, I thought I’d share my trials and findings…

I tend to lead a fairly predictable life, doing pretty much the same sort of things over the course of any given workday, and that enables me to assess the effects of my actions with reasonable certainty. Anyway, these are my findings – do with them as you will.

There’s no TL;DR here. Either this stuff interests you or it doesn’t 🙂

So first off, I turned down the brightness a bit. “Auto” and then halfway down.

I disabled a few apps. Nothing insane, just the ones I don’t use or that are obvious resource hogs (see screenshot). It still sucks that you can’t completely uninstall preloaded stuff unless you root, but at least we have this.

As for syncing apps, I’ve disabled Samsung Sync completely. It’s unclear to me what Samsung Sync offers beyond what I’m already getting with Google syncing contacts etc.

I have chosen a Twitter client (Tweetings) that offers proper push notifications rather than constant/periodic polling.

Since anything less than Titanium Backup functionality is useless to me in terms of “backup”, I have disabled both Samsung’s and Google’s backup of application data, phone logs, WiFi passwords etc.

I disable Location, unless I specifically need it. Google Now with location services on is quite nifty, but come on… I know where I work, I know how to get there and roughly how long it takes. I know where I’m going on vacation and what time the plane leaves. You probably shouldn’t leave that to Google Now anyway.

I don’t need LTE on my phone. I don’t use it as a modem for other devices, and I don’t download massive files. If I’m browsing tech- or news- or social networking sites/apps, my online bottleneck is services that pull ads, scripts, tracking and other content from 20 different servers/APIs, which means that latency is my enemy, not raw speed. Latency and Chrome, actually, but that’s another discussion.

In that context, the difference between H+ and LTE is negligible. Battery impact, however, is not.

Even though I am on a strong network, and on WiFi a substantial part of the day, enabling LTE cuts about an hour off my screen-on time and 2-3 hours off overall battery life. That’s something, though 4½ hours of screen and 16 hours off charger still isn’t bad. 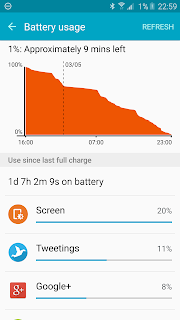 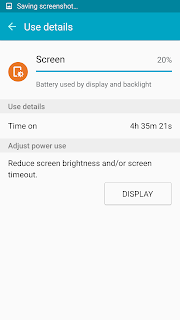 Look, I’m not a luddite. Far from it.

I sync the prominent Google apps except Drive and Fit. I don’t need to be instantly notified of my former colleagues liking their new colleagues’ new haircuts, but I still use Facebook Messenger with my friends. I play games. I listen to Spotify and Google Play Music a lot, and I watch youtube videos with my son.

I may turn down the brightness a little when I’m not gaming or watching video, but I’m not running around with a darkened screen.

My photos and videos are backed to both Dropbox Camera Upload and Google+ Photos over WiFi and mobile data.

I have bluetooth enabled 24/7 because I’m lazy and forgetful and I’m paired with either a headset or my car a lot.

Battery optimization is the art of disabling unused or unnecessary features while not rendering your $1000 smartphone unusable for the purpose of which you bought it. And apart from the disabled stuff mentioned above, I do use my smartphone!

One last thing: These are things I’d do with any phone, and I was consistently getting 6-7 hours of screen on time with my Sony phones while charging every 2 days. Which goes to show that the Samsung Galaxy S6 certainly isn’t top dog when it comes to battery performance…it just isn’t quite as shitty as everyone seems to think 🙂

Although I’m not actively trying to politicize or evangelize, you may come across odd points, controversial stances and generous profanity. If you’re easily offended, this site might not be for you at all, although being offended is not in any way dangerous, and you may consult Mr. Steve Hughes’ words on the matter.

Scroll Up
I use techical cookies to ensure the functionality of my website. Your use of this site, my apps and services, are subject to my privacy policy. Tap the button or scroll at least 350px to accept it. I acceptRead more